Living outside the metropolises: Where it's still worthwhile in Berlin's environs

1. Real estate price development in Berlin and Brandenburg in 2020

The pandemic has significantly increased the desire of many people for peace, privacy and the ability to avoid contacts. Demand for rural areas has increased. People crave more open space, larger lots and more nature. In addition, remote work and home offices have become established in many corporate cultures. For many people, therefore, it is no longer imperative to live close to their place of work. The increasing willingness to accept longer commuting times due to flexible working time models is significantly expanding the radius of the search for a home to include the wider metropolitan area - as is the case in Berlin. VON POLL IMMOBILIEN experts have analyzed how this effect will impact real estate prices for detached and semi-detached houses in Brandenburg's counties and independent cities based on asking prices for 2020 compared to 2019.

"The demand for real estate in the surrounding area has increased. One factor is also that corresponding properties with larger plots of land in urban areas are now many times more expensive. Therefore, prospective buyers have been looking around the periphery of Berlin for some time. The pandemic has further intensified this development, causing real estate prices immediately around Berlin to rise sharply. Due to the so-called home-office effect, many prospective buyers are more willing to compromise and take on longer commutes into the city. The outermost districts such as Prignitz and Elbe-Elster also benefit from this development.'

Not surprisingly: With 699.000 euros in Potsdam and 595,000 euros in Berlin, property buyers in the two state capitals have to reckon with the highest average sums for a detached or semi-detached house. Thus the purchase prices rose in potsdam in the comparison to the period of the previous year by full 18.5 per cent, in Berlin against it only by 7.1 per cent.

Interesting against it is a view of the most favorable districts of the Ranking. In Prignitz, homebuyers paid an average of 139,000 euros in 2020, in Elbe-Elster 122,500 euros. This means that an average detached or semi-detached house in Berlin is four times more expensive than in Prignitz. However, compared to 2019, property prices in Prignitz climbed by a whopping 39 percent and in Elbe-Elster by 25 percent, the most of all the regions analyzed. Nevertheless, the favorable price level away from the periphery around Berlin, i.e. in the outermost counties of Brandenburg, is very interesting for potential buyers. This also applies to the districts of Ostprignitz-Ruppin, with an average of 215,000 euros for a one- or two-family house and a price increase of 16.2 percent compared to 2019, Uckermark with 166,500 euros and the lowest price increase in the ranking of 4.7 percent, as well as Oberspreewald-Lausitz and Spree-Neiße, each with 150,000 euros and a price increase of 11.1 percent and 7.9 percent, respectively. 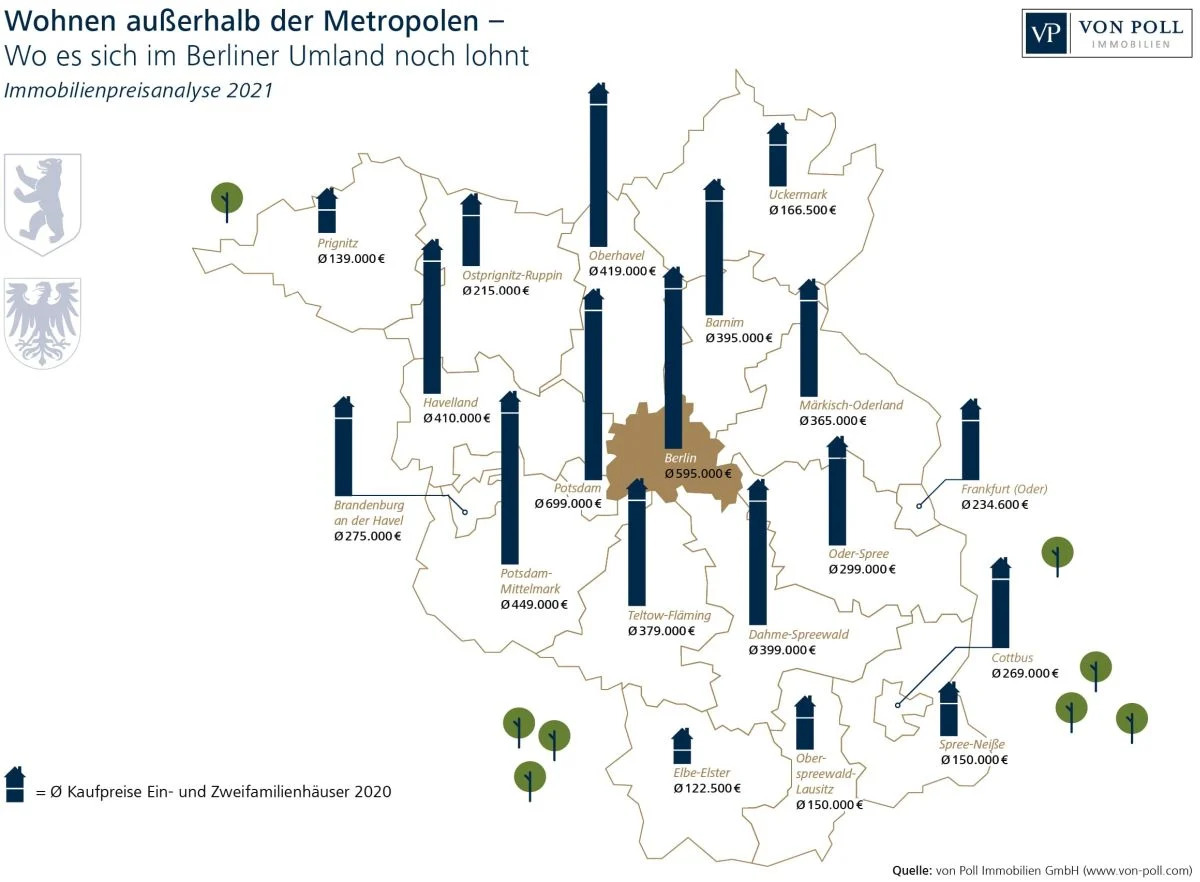 "Due to the rather difficult infrastructure and transport as well as public transport connections, the outer districts such as the Prignitz were often a criterion for exclusion for real estate seekers. However, the pandemic has changed people's awareness. As a result, demand for residential property, especially as a second home, has also risen sharply in the Prignitz. Even properties over one million euros are now being brokered more quickly. It is quite conceivable that some buyers will move their primary residence here in the future. Also residential-office communities are in trend and increase the demand for two-family homes'

The midfield in terms of price is led by the districts immediately around Berlin: Potsdam-Mittelmark with 449.000 euros, Oberhavel with 419,000 euros and Havelland with 410,000 euros. While the purchase prices in Potsdam-Mittelmark and Havelland have increased between 15.1 percent and 15.5 percent compared to the same period last year, the increase in Oberhavel is 10.3 percent. In the purchase price ranking, the districts of Dahme-Spreewald follow with 399,000 euros and a price increase of 8.1 percent, as well as Barnim with 395,000 euros and an increase of 14.5 percent. "The construction of Tesla's Gigafactory, the Amazon logistics center and the new BER airport have resulted in a very positive development of standard land values in Dahme-Spreewald. What was considered an insider tip about a year ago has in some cases experienced high price increases. These include the Heideseekreis, the city of Mittenwalde and its surrounding area and also Storkow-Mark in the Oder-Spree district," says Sylvia Maltz, office manager at VON POLL IMMOBILIEN in Königs Wusterhausen. 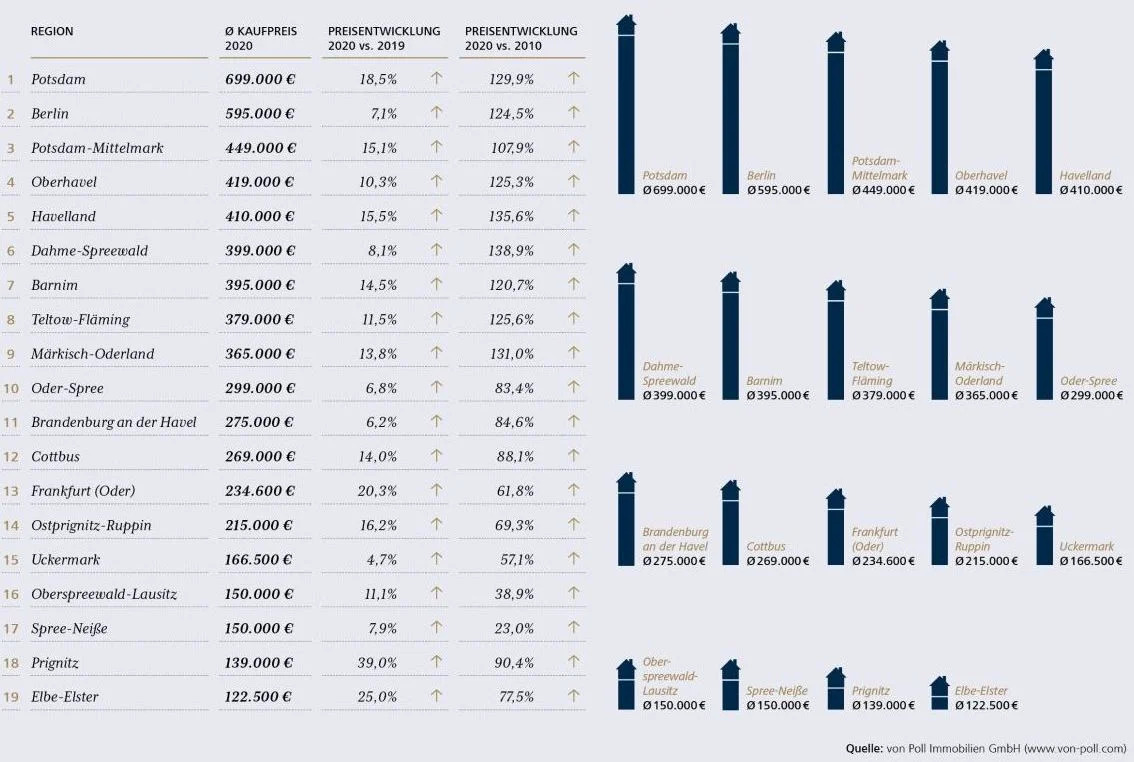 But also the districts of Teltow-Fläming with an average of 379,000 euros and a price increase of 11.5 percent and Märkisch-Oderland with 365,000 euros with 13.8 percent higher property prices compared to the previous year are interesting regions for buyers.

"Prospective buyers are increasingly taking a look at the outer rings around Berlin and the wider surrounding area. Currently, attractive properties can still be found here, for example in the direction of Luckenwalde, Am Mellensee, Trebbin and Rehagen. However, anyone thinking of acquiring a property should not wait too long. The current price level will continue to develop.'

Under the 300,000 euro limit in real estate prices arrange themselves the district Oder-Spree with 299,000 euros and the district-free city of Brandenburg an der Havel with 275,000 euros. The prices are compared to the same period last year moderate by 6.8 percent and 6,2 percent increase

"Brandenburg an der Havel, the city on the river, affectionately known as Little Venice, not only offers a great recreational factor, but at the same time also a good infrastructure thanks to its connection to the A2 freeway as well as the regional train service. Due to its location in the extended surrounding area and the positive development within the last 20 years, we note in Brandenburg generally an increased interest in buying among owners and capital investors.'

In the independent cities of Cottbus and Frankfurt (Oder), home buyers in 2020 paid an average of 269.000 euros and 234,600 euros, respectively. In this context, Frankfurt (Oder) in particular recorded the third strongest price increase compared to 2019 of all analyzed regions, at 20.3 percent. In Cottbus, the purchase prices for detached and semi-detached houses have increased by as much as 14 percent.

2. Price increase of the last ten years in Dahme-Spreewald six times as high as in Spree-Neiße

It is also interesting to look at the purchase price development of the last ten years: while the property prices for single and two-family houses in Dahme-Spreewald have increased only slightly compared to 2019 (by 8.1 percent), the price increase compared to 2010 is the strongest there with 138.9 percent. In Havelland, at 135.6 percent, in Märkisch-Oderland, at 131 percent, and in Potsdam, at 129.9 percent, purchase prices have also climbed significantly over the past ten years. A similarly high price level can be observed in the districts of Teltow-Fläming, Oberhavel, Barnim and Potsdam-Mittelmark, as well as in the capital Berlin - here, purchase prices have risen by between 107.9 percent and 125.6 percent. By contrast, purchase prices in Prignitz (90.4 percent), Cottbus (88.1 percent), Brandenburg an der Havel (84.6 percent), Oder-Spree (83.4 percent) and Elbe-Elster (77.5 percent) were below the 100 percent threshold. In Ostprignitz-Ruppin, Frankfurt (Oder) and Uckermark, buyers paid between 57.1 percent and 69.3 percent less for single- and two-family homes ten years ago than in 2020. The smallest price increases over the past decade can be seen in Oberspreewald-Lausitz at 38.9 percent and Spree-Neiße at 23 percent.

The data basis of the purchase price analysis is based on the offer prices of Empirica Regio for 2020, 2019 and 2010.
All data and graphics may be used and published with a reference to the following source: von Poll Immobilien GmbH.
.