Living outside the metropolises: Where it's still worthwhile in Frankfurt's environs

1. Real estate price development in Frankfurt and the surrounding area in 2020

After remote work and home office have become firmly established in many corporate cultures, many employees want to use the newfound flexibility for themselves. Since it is no longer mandatory to live close to work, buyers are increasingly looking for properties in more rural areas with good infrastructure, where they can have more open space and larger outdoor spaces. As a result of the pandemic, more and more prospective buyers are therefore expanding their radius in their search for a home of their own to the further outskirts of the metropolises - and the same applies to Frankfurt am Main. How this effect on the prices for detached and semi-detached houses affects the surrounding counties and independent cities around Frankfurt am Main, the VON POLL IMMOBILIEN experts have analyzed on the basis of the offer prices* for 2020 compared to 2019.

"The demand for real estate in the wider metropolitan area has increased. A factor is also that corresponding properties with larger land in urban areas are now many times more expensive. Therefore, prospective buyers have been looking around the periphery of Frankfurt am Main for some time. The pandemic has further intensified this development significantly, causing real estate prices immediately around Frankfurt to rise sharply. Due to the so-called home-office effect, many prospective buyers are more willing to compromise and take on longer commutes into the city. The outermost counties of the Rhine-Main area such as Vogelsberg, Limburg-Weilburg and Odenwald can also benefit from this development.'

Not surprisingly, Frankfurt am Main leads the ranking of asking prices with an average of 750.000 euros for a detached or semi-detached house. Compared to 2019, property prices have risen by 10.5 percent. But prospective buyers also have to reckon with a high price level for detached and semi-detached houses in the neighboring districts of Main-Taunus at €699,000 and Hochtaunus at €693,450, which are among the ten cities and districts with the strongest purchasing power in Germany. Here, prices have risen by 12.7 percent and 7.5 percent respectively compared to 2019.

Interesting, on the other hand, is a look at the cheapest county in the ranking. In the Vogelsbergkreis, buyers paid an average of 227,000 euros in 2020. Thus, an average one- or two-family house in the Vogelsberg district is three times cheaper than in Frankfurt am Main. However, the purchase prices climbed compared to the same period last year in Vogelsbergkreis by a whopping 42.8 percent the strongest of all regions analyzed. Property prices below 300,000 euros were found in 2020 otherwise only in the second and third ring of counties around Frankfurt am Main. In the Limburg-Weilburg district, prospective buyers paid an average price of 286,400 euros with a price increase of 11.2 percent, in Odenwaldkreis it was 295,000 euros with the second strongest price increase in the ranking with 20.4 percent.

The price midfield is led by the densely populated counties around Frankfurt am Main: In Groß-Gerau, purchase prices stagnated at 522,500 euros compared to the previous year, while house prices in Darmstadt-Dieburg climbed to 495,000 euros, an increase of 10 percent.

"Locations with a balanced infrastructure are of great interest to search clients. Buyers who work in the metropolises of Frankfurt am Main, Darmstadt, Mainz or Wiesbaden are often looking for the rural tranquility to live. Connections to highways and train connections, as well as to schools and kindergartens, are particularly important to them. The Hessian Ried in southern Hesse is a prosperous area with very good future prospects.'

In the Rheingau-Taunus district, away from the periphery around Frankfurt, real estate prices for one- and two-family homes rose by a whopping 20.1 percent to 479.000 euros.

"In the last three to five years, real estate prices in the Rheingau-Taunus district have increased significantly. Due to the pandemic, the demand for larger properties and more living space for home office has increased sharply. We see a clear trend here back to rural regions. Increased demand for residential real estate is particularly noticeable in Idstein and the surrounding area. Towns such as Taunusstein or Niedernhausen are in high demand, as they have not yet reached the level of Idstein in terms of price. The excellent infrastructure in these regions is an absolute plus.'

The midfield in the Rhine-Main region also includes the counties of Bergstrasse with an average of 449,000 euros for a house, Mainz-Bingen with 435,000 euros and the county of Aschaffenburg with 430,000 euros. The prices rose in these counties compared to the previous year between just under 12 percent and 15 percent. 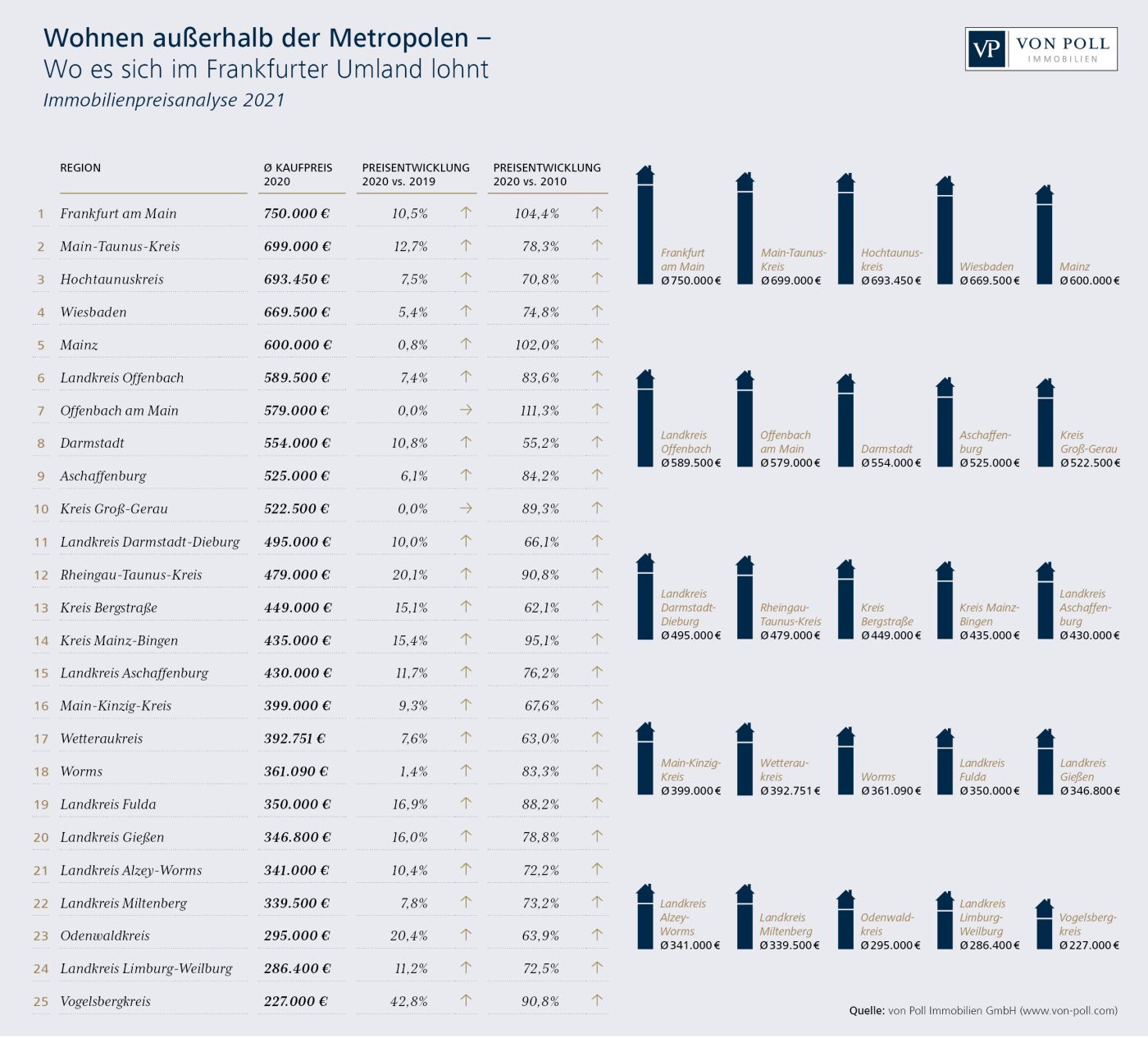 Although Main-Kinzig-Kreis and Wetteraukreis are directly adjacent to Frankfurt am Main, the prices here are still below 400,000 euros for a property. On average, the purchase prices in 2020 were 399,000 euros and 392,751 euros, respectively, with rising prices by 9.3 percent and 7.6 percent, respectively.

In contrast, houses in the outermost counties of the Frankfurt/Rhine-Main metropolitan region were somewhat cheaper. In Worms, homebuyers paid an average price of 361,090 euros in 2020, with price levels rising by just 1.4 percent compared to 2019.

"The effects of the pandemic have strongly influenced the market development around Worms. The demand for houses is very high. Popular objects are located north of Worms in the direction of Mainz and on the B9, because here the transport links are very advantageous.'

Also in the districts of Fulda with 350,000 euros and Giessen with 346,800 euros, the rising interest in the more distant surrounding area is increasingly affecting the real estate market. The average purchase prices for detached and semi-detached houses increased here by between 16 percent and 16.9 percent last year. No major differences between the states in the metropolitan region can be seen in the ranking. For example, the price level in the Rhineland-Palatinate district of Alzey-Worms, at 341,000 euros, is almost identical to the Bavarian district of Miltenberg, at 339,500 euros. The price increases compared to the same period last year rank at 10.4 percent and 7.8 percent, respectively.

"We are currently noticing an increased demand from the Rhine-Main area. Search customers are willing to accept longer commuting distances. In addition, Hofreiten and old farmhouses with barns to expand or to pursue hobbies are in great demand.'

In the surrounding independent cities around Frankfurt am Main, prospective buyers must continue to reckon with a high price level for detached and semi-detached houses: In Wiesbaden in Hesse with an average of 669.500 and a price increase of 5.4 percent and in Mainz in Rhineland-Palatinate at 600,000 euros with a significantly lower price increase of only 0.8 percent. While homebuyers in the Offenbach district paid an average of 589,500 euros with a price increase of 7.4 percent, purchase prices in the independent city of Offenbach am Main stagnated at 579,000 euros compared to the same period last year. In Darmstadt in Hesse, property prices climbed by 10.8 percent to 554,000 euros, while in Aschaffenburg in Bavaria they rose by only 6.1 percent to 525,000 euros.

2. Price increase of the last ten years in Offenbach on the Main more than twice as high as in Darmstadt

A look at the purchase price development of the last ten years shows that the real estate prices for one and two-family houses in Offenbach on the Main with 111.3 percent rose most strongly compared with 2010. But also in Frankfurt am Main with 104.4 percent, Mainz with 102 percent and in the Mainz-Bingen district with 95.1 percent, the purchase prices have climbed significantly in the last ten years. An equally high price increase can be observed in the Rheingau-Taunus and Vogelsberg districts - here, purchase prices rose by 90.8 percent in each case. Compared with 2010, prospective buyers in 2020 in the districts of Groß-Gerau, Fulda, Aschaffenburg, Offenbach and Worms are paying between 83.3 percent and 89.3 percent more for a detached or semi-detached house. In the districts of Giessen, Main-Taunus-Kreis, Aschaffenburg, Wiesbaden and in the districts of Miltenberg, Limburg-Weilburg, Alzey-Worms and Hochtaunuskreis, property prices have risen by between 70.8 percent and 78.8 percent. By contrast, purchase prices in the Main-Kinzig district rose by 67.6 percent, the Darmstadt-Dieburg district by 66.1 percent, the Odenwald district by 63.9 percent, the Wetterau district by 63 percent and the Bergstrasse district by 70.8 percent. The lowest price increase in the ten-year review can be seen in Darmstadt - compared to 2010, buyers pay only 55.2 percent more for a house in 2020.

The data basis of the purchase price analysis is based on the offer prices of Empirica Regio for 2020, 2019 and 2010.

All data and graphics may be used and published with a reference to the following source: von Poll Immobilien GmbH.