Living outside the metropolises: Where it's still worthwhile in Hamburg's environs

1. Real estate price development in Hamburg and surrounding areas in 2020

The effects of the pandemic on people's lives are clearly noticeable - even in everyday working life. Remote work and home offices have become firmly entrenched in many corporate cultures. This newfound flexibility allows workers to separate their home and work locations more closely. In addition, there is a change in people's awareness and a desire for more freedom and nature. As a result, more and more prospective buyers are expanding their radius in their search for a home to include the wider hinterland of the metropolises - as well as around Hamburg. This in turn causes prices to rise in the neighboring counties. VON POLL IMMOBILIEN experts have analyzed the purchase price development for detached and semi-detached houses in Hamburg and the wider surrounding area based on the offer prices for 2020 compared to the same period of the previous year and show which regions buyers should keep an eye on.

"The demand for real estate in the surrounding area has increased. One factor is also that corresponding properties with larger plots of land in urban areas are now many times more expensive. As a result, prospective buyers have been looking around Hamburg's periphery for some time. The pandemic has further intensified this development, causing real estate prices immediately around Hamburg to rise sharply. Due to the so-called home-office effect, many prospective buyers are more willing to compromise and take on longer commutes to the city. The counties in the second and third ring around Hamburg are now benefiting from this development.'

This also becomes clear when looking at the price development for detached and semi-detached houses for 2020 compared to the same period last year. Unsurprisingly, the Hanseatic city of Hamburg leads the ranking with an average of 599,425 euros. This is followed by three districts from the first ring around Hamburg: It was 20 percent cheaper in the Stormarn district. Here prospective buyers had to count on the average 475,000 euro for an object. Somewhat more inexpensive it was in Pinneberg with 429,000 euro as well as in the region Harburg with 420,000 euro.
Only and two-family houses were most favorable in the districts Ludwigslust Parchim with on the average 174,560 euro and Luechow Dannenberg with approximately 159,500 euro, both southeast of Hamburg convenient. This meant that Lüchow-Dannenberg, as the region with the lowest property prices, was almost four times cheaper than frontrunner Hamburg. 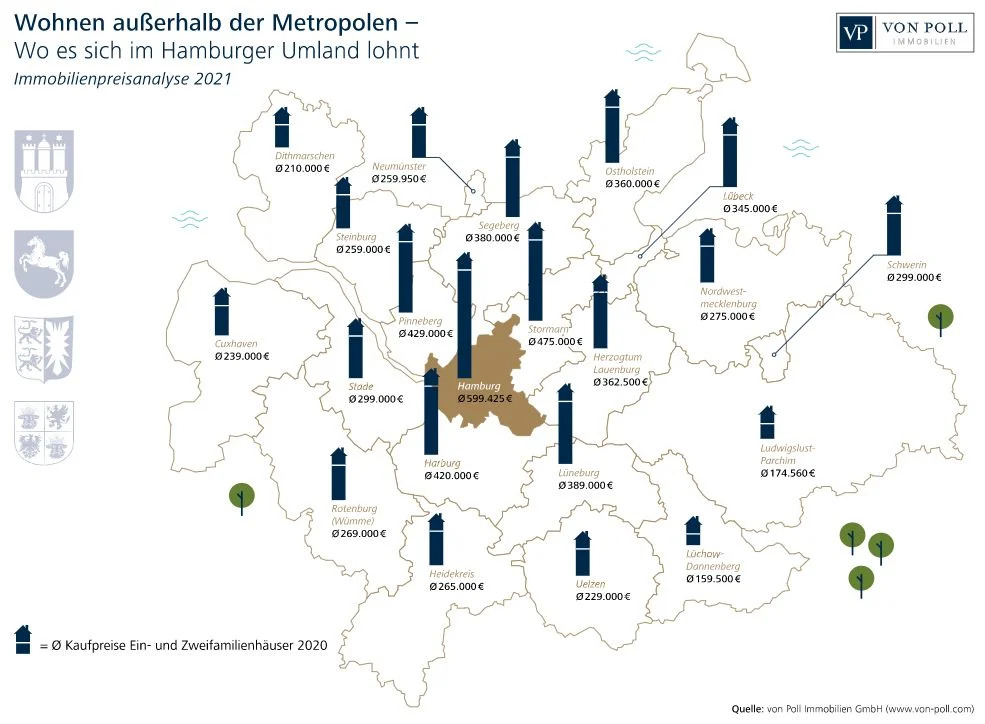 The price midfield in the purchase price ranking for detached and semi-detached houses is led by the districts of Lüneburg with approximately 389,000 euros, Segeberg with 380,000 euros, Duchy of Lauenburg with 362,500 euros and Ostholstein with an average of 360,000 euros. Immediately thereafter follows the somewhat cheaper district-free city of Lübeck with 345,000 euros for a one- or two-family house.

"Here it becomes clear that the average price level for detached and semi-detached houses in the Schleswig-Holstein counties, north of Hamburg, is much higher than in counties located in Lower Saxony or Mecklenburg-Western Pomerania. One reason is the close proximity to the North Sea and Baltic Sea, which offer an excellent refuge as recreational areas.'

Prices below 300.000 euros were found in 2020 only in the second and third ring of counties around Hamburg. The exception here was the district of Stade, located in the first ring: There, prospective buyers paid an average of 299,000 euros for a property. Schwerin called up the same average price, followed by northwest Mecklenburg with 275,000 euro, Rotenburg (Wümme) with 269,000 euro, the heath circle with 265,000 euro as well as Neumünster and Steinburg with in each case approximately 259,000 euro. Still somewhat cheaper, however, were houses in Cuxhaven with 239,000 euros, Uelzen with 229,000 euros and Dithmarschen with 210,000 euros.

"The Kehdinger Land region on the lower reaches of the Elbe, located in the district of Stade, is still a real insider tip with attractive prices. However, the expansion of the A20 Elbe crossing could soon change that. In the future, the new tunnel route will connect Drochtersen in the Stade district with Glücksstadt in the Steinburg district. In addition, the A26 freeway is currently under construction, which will link up with the A7 near Hamburg via Stade and thus also significantly reduce commuting times to the Hanseatic city.' 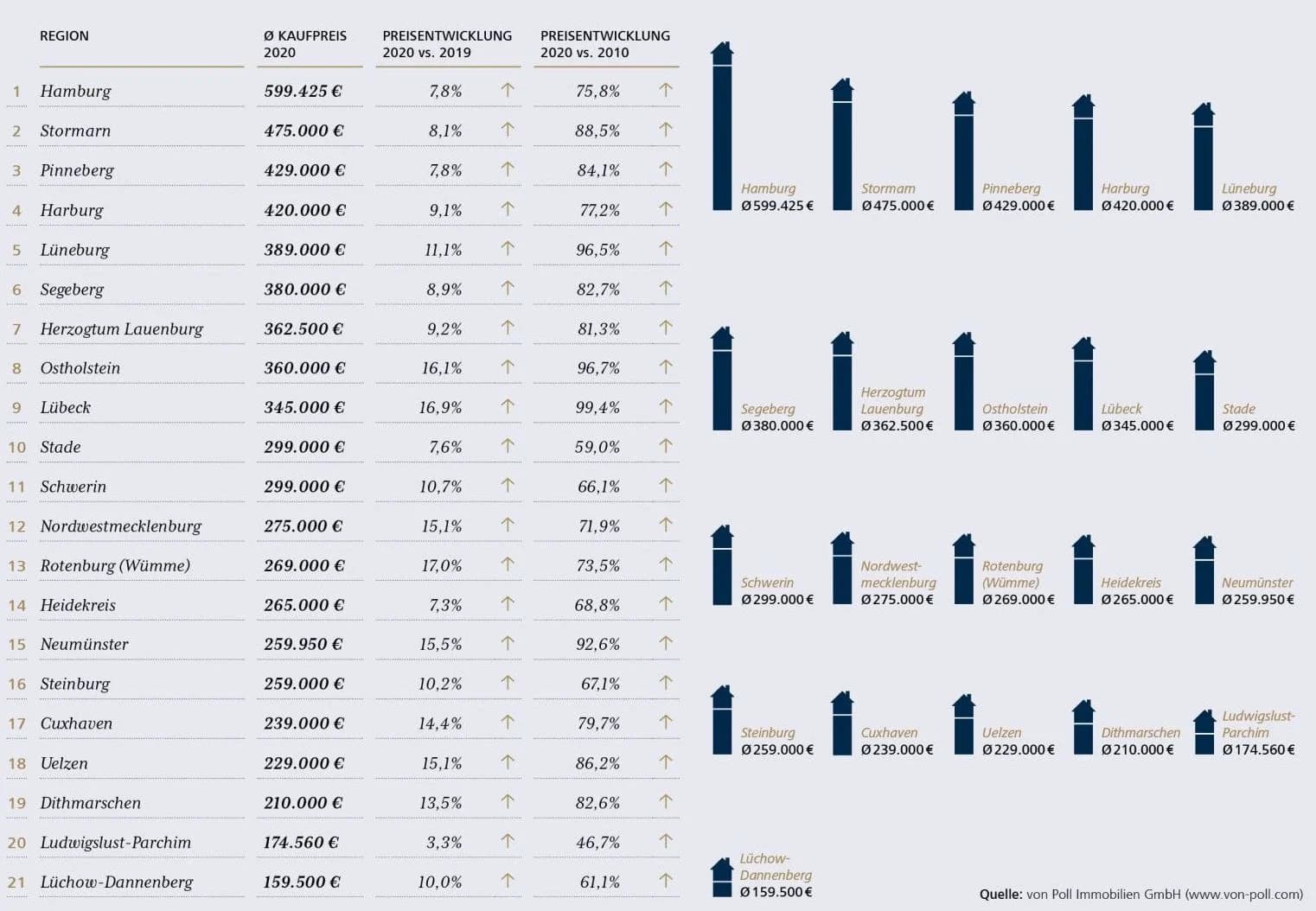 Even in 12 of 21 analyzed regions in the suburban belt including the city of Hamburg, the prices for residential property climbed between ten percent and nearly 17 percent. Rotenburg (Wümme) and Lübeck recorded the strongest price increases from 2019 to 2020, each with almost 17 percent, closely followed by Ostholstein with 16.1 percent. While price increases in Neumünster, Uelzen and Northwest Mecklenburg ranged from 15.1 percent to 15.5 percent, average property prices in Cuxhaven increased by 14.4 percent, in Dithmarschen by 13.1 percent and in Lüneburg by 11.1 percent. In Schwerin, Steinburg and Lüchow-Dannenberg, property price increases ranged from ten percent to 10.7 percent.

"It is striking that two thirds of the analyzed districts with price increases in the double-digit range are currently still below the 300,000 euro mark for detached and semi-detached houses. It is therefore to be expected that the upward trend in these regions will continue in the coming years. Capital investors in particular can still find profitable properties here. But these regions also offer good opportunities for anyone looking for a second home. In Cuxhaven, for example, we have registered an increased demand for properties as second homes in recent years. Interestingly, the buyers here come mainly from the states of Bavaria and North Rhine-Westphalia.'

The counties of Herzogtum Lauenburg and Harburg recorded single-digit price increases of 9,2 percent and 9.1 percent respectively, as well as Segeberg with 8.9 percent and Stormarn with 8.1 percent. In the Hanseatic City of Hamburg as well as in the regions of Pinneberg, Stade and the Heidekreis, average prices for detached and semi-detached houses increased by between 7.3 percent and 7.8 percent. This means that Hamburg, as the front-runner in terms of purchase prices, and the three most expensive districts in the Hamburg region are still in the single-digit percentage range in terms of purchase price development compared with the previous year. The lowest increase with only 3.3 percent was in the district Ludwigslust-Parchim, which at the same time calls the second cheapest real estate prices in the entire ranking.

2. Price increase of the last ten years in Luebeck more than twice as high as in Ludwigslust Parchim

In the ten-year comparison Luebeck leads the Ranking of the purchase price developments - here buyers pay 2020 approximately 99.4 per cent more for a one and two-family house than 2010. Also in east Holstein with 96.7 per cent, in Lueneburg with 96.5 per cent and in Neumuenster with 92.6 per cent the purchase prices rose clearly in the last ten years. Compared to 2010, prospective buyers in 2020 in Stormarn, Uelzen, Pinneberg, Segeberg, Dithmarschen and Duchy of Lauenburg are paying between 81.3 percent and 88.5 percent more for a house. In Cuxhaven, Harburg, Hamburg, Rotenburg (Wümme) and northwest Mecklenburg the real estate prices rose between 71.9 per cent and 79.7 per cent. Below the 70 percent limit, the regions of Heidekreis, Steinburg, Schwerin and Lüchow-Dannenberg with price increases between 61.1 percent and 68.8 percent rank themselves in the ten-year review. Prices for detached and semi-detached houses rose the least in Stade with 59 percent and Ludwigslust-Parchim with 46.7 percent.

The data basis of the purchase price analysis is based on the offer prices of Empirica Regio for 2020, 2019 and 2010.
All data and graphics may be used and published with a reference to the following source: von Poll Immobilien GmbH.