Our Team in Mainz As a native of East Frisia, Gabriele Wilde-Schlaak has lived in the capital of Rhineland-Palatinate for more than 40 years and, as the owner of the VON POLL IMMOBILIEN store, is very well known and networked locally.

In 2003, she began her brokerage activities in the region, actively supporting her husband who, with the VON POLL IMMOBILIEN stores in Mainz and Wiesbaden, set up some of the first offices of the brokerage house in the greater Rhine-Main area. VON POLL IMMOBILIEN was founded in 2000, and the company is headquartered in Frankfurt.

After the much too early death of Udo Schlaak, Gabriele Wilde-Schlaak took over the management of the offices in 2011. With the experience she had gained by then and her large network, she was able to further establish and expand the Mainz and Wiesbaden locations and impressively increase their success. She found support in her daughter Kim Ricci-Schlaak, who completed her training as a real estate agent (IHK) and her further training at the company's headquarters in Frankfurt.

The young, dynamic team now consists of fifteen agents and four trainees, as well as six other employees. Their stores in Mainz and Wiesbaden are among the renowned and leading brokerage companies locally. The reason: The competent, reliable support of owners and search customers is always the focus for Gabriele Wilde-Schlaak and her colleagues. The dedicated support of their clients from the initial personal meeting to the successful conclusion is a matter of course for them. The team focuses on the brokerage of properties of stable value in preferred residential as well as business locations. Born in Mainz in 1991, the real estate career for Kim Ricci-Schlaak began after graduating from high school with the training as a real estate agent (IHK) in Frankfurt at VON POLL IMMOBILIEN. Her father Udo Schlaak was successful in the real estate business all his life and the daughter had the desire to follow in his footsteps from an early age.

After successfully completing her two-and-a-half-year apprenticeship and starting her career at VON POLL IMMOBILIEN, Kim Ricci-Schlaak took the exam as a trainer and trained as a freelance expert for real estate valuation (PersCert). After receiving two awards in the company as the most successful young agent under 30, Kim Ricci-Schlaak took over the management of the real estate stores in Wiesbaden and Mainz together with her mother in 2015. In the past three years, she continuously received an award from the brokerage house as one of the most successful real estate consultants internationally, most recently taking third place in 2021.

Kim Ricci-Schlaak is a real estate agent and branch manager with heart and soul. She knows her local market very well and has an excellent network in the region. She now manages a team of fifteen brokers, four trainees and six other employees. As a native of Taunusstein, Enrico Ricci comes from the Rheingau-Taunus district, just 9 kilometers from Wiesbaden. He went to school in the Hessian state capital and studied at Johannes Gutenberg University in Mainz. This gave him the opportunity to get to know both cities and their surroundings in depth.

In parallel to his studies, Enrico Ricci worked in his parents' catering business and already appreciated the personal contact with customers and the associated service concept there. Both are also very important to him in his current position at VON POLL IMMOBILIEN. He gained further professional experience in the product management of a well-known manufacturer of household goods and a distribution company in the region.

The great personal interest in architecture and real estate as well as the desire for more customer contact moved Mr. Ricci to qualify as a real estate agent in 2013 at the in-house VON POLL IMMOBILIEN Academy in Frankfurt. Since then, he has been enthusiastically brokering properties for sale and rent at the Wiesbaden and Mainz locations. His customer- and service-oriented approach contributes significantly to his success. As a native of Mainz, Christine Hilscher is very well connected in Mainz.

Through her father, a civil engineer and architect, she became enthusiastic about architecture and real estate very early. First, Ms. Hilscher successfully completed an apprenticeship as a hotel specialist, directly followed by studies with a degree as a foreign language correspondent.

During her many years of work as a translator in a Frankfurt company as well as her later work as a patient manager and aesthetic consultant in a private clinic in Mainz, Christine Hilscher gained a lot of experience that benefits her today for her work as a real estate consultant.

The decision to change industries to VON POLL IMMOBILIEN in Mainz to work as an independent real estate consultant was very easy for Christine Hilscher, especially since she can perfectly realize her passion for real estate here and follows her daughter Luisa Hilscher with this step.

With her open, friendly manner and her negotiating skills, combined with empathy and passion, Christine Hilscher is always available to advise our customers. Born in Mainz, Luisa Tislenko successfully graduated from high school in 2016 with a focus on business. After initially studying to become a teacher in English and Spanish, she decided to train as a real estate agent (IHK). She completed her training at VON POLL IMMOBILIEN.

She was able to broker numerous properties with great customer satisfaction. Whether renting or selling - gladly it stands for you in all questions approximately around your real estate actively to the side. Mrs. Tislenko estimates the market price of your real estate gladly free of charge and without obligation and advises you in the switching case competently and reliably. 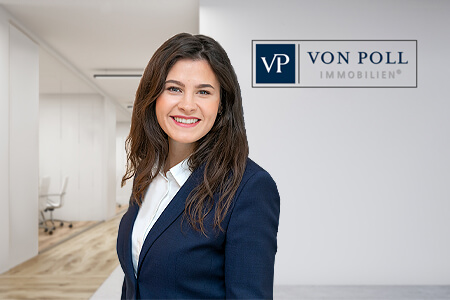 The interest in architecture in combination with the joy of sales quickly awakened in Ms. Elisabeth Malik the curiosity for the brokerage profession.

Since 2017 she is part of the VON POLL team Mainz and Wiesbaden. Due to the completed training as a real estate agent (IHK) as well as further training measures in the Frankfurt headquarters and personal experience in sales and rentals, Ms. Malik is well trained and eager to use and further expand her knowledge.

She enjoys dealing with and advising customers - and this is also reflected in positive feedback. The qualified answering of questions in the real estate sector combined with a healthy dose of empathy are the optimal mix for Ms. Malik's young success. Born in Mainz in 1989, graduated from Otto Schott High School, studied at Johannes Gutenberg University, Philipp Rohe is a true Mainzer. He began his real estate career after graduating from high school during his studies. Since 2016, he has been an assistant to the office management.

For about three years now, he has been a full-time part of the Mainz team. He acquired his expertise through training as a real estate agent (IHK). In addition to his excellent knowledge of the market, his knowledge of human nature and his analytical way of working are what set him apart. His customers particularly appreciate his reliability and high level of commitment.

In addition to his work, Philipp Rohe is active on a voluntary basis. In July 2014, Oscar Lagemann started his career at VON POLL IMMOBILIEN. After an internship, he began his training as a real estate agent (IHK) in the Wiesbaden office. Upon completion of this in 2017, he decided to deepen his acquired knowledge with a degree in real estate management at the IREBS in Regensburg.

After successful completion including the title of Bachelor of Science, he was drawn back to his home, the state capital Wiesbaden. Since April 2021, he has now been supporting the branch management as Head of Internal Services in the planning of internal as well as external organizational processes. In September 2021, he also passed the examination to become a trainer (IHK) and since then has also been available as a competent contact person for trainees in the Wiesbaden, Mainz and Ingelheim/Bingen stores. 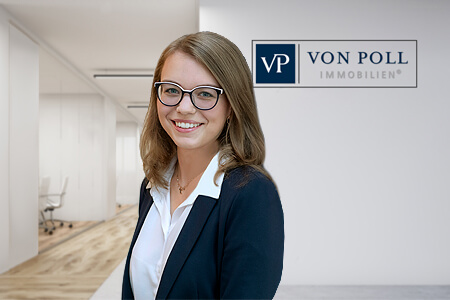 Sara Gräf was born in Mainz in 1999. Already since childhood you were taken by your grandfather, which was active in the real estate industry, on appointments and thus got an insight into the professional world. Through an internship during school, at VON POLL IMMOBILIEN in Mainz, you were sure to want to take your career path in this direction.

In June 2022, she also successfully passed the exam to become a trainer (IHK) and has since then additionally been available to the trainees as a competent contact person.

Now she is looking forward to starting her career at VON POLL IMMOBILIEN in the Mainz, Wiesbaden and Ingelheim/Bingen store as a deputy office manager and trainer. With passion, commitment and determination, Ms. Gräf will actively support the team. Through inventory real estate in the parental business Manuel Cornejo Martin had points of contact with the real estate market. The customer-oriented work is one of the focal points, which has excited him and aroused his interest in this line of work.

After his internship, Manuel Cornejo Martin would like to start an apprenticeship at Von Poll as a real estate agent, in order to create a basis for his studies in the field of real estate economics with the degree. 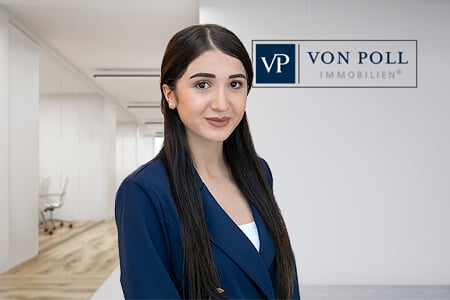 Monika Sukiasian was born in Russia in 2002. In 2020, she successfully completed her advanced technical college entrance qualification at a business high school in Bad Kreuznach. Here she discovered her passion for a commercial profession and already knew that her professional life should go in this direction.

She was already able to gain her first experience in the real estate industry during a four-month internship at a property management company. Finally, she wanted to expand her knowledge and completed a three-month internship at VON POLL IMMOBILIEN in Mainz/Wiesbaden. Her friendly and confident demeanor, willingness to learn, and enjoyment of communicating with people were the catalyst for her to begin her training at VON POLL IMMOBILIEN in August 2021.

Her goal is to successfully complete her training and become a successful broker at VON POLL IMMOBILIEN. Her diverse language skills will accompany her on her way to success. 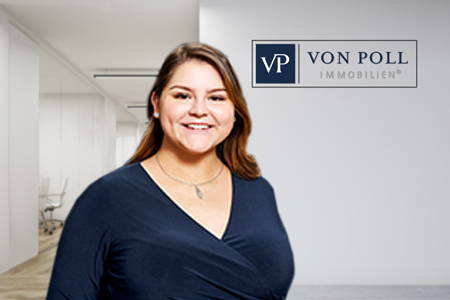 Anna Gerein comes from Idar-Oberstein, grew up in Mainz and started a one-year internship at VON POLL IMMOBILIEN on site in September 2019. Her interest in real estate and architecture had already developed in the advanced art course in the upper school of the Theresianum Gymnasium in Mainz. She now hopes to make this exciting subject her profession.

Anna Gerein is pursuing this goal with a lot of energy - after her internship, she will take her advanced technical college entrance qualification. She has set her sights on starting her apprenticeship as a real estate agent at the renowned VON POLL IMMOBILIEN Mainz brokerage house afterwards.

The very determined, committed and reliable intern is looking forward to challenging and dynamic years of apprenticeship. Elena Wörle was born in Frankfurt a.M. in 2002 and has lived in Mainz since 2004. She is therefore almost a genuine "Meenzer Mädche".

She successfully completed her school career in 2021 with the general qualification for university entrance. Already during the school time she had large interest both in architecture and in real estates. Her first points of contact were during a student internship with an architect. In spring 2022, she gained further experience through a three-month internship at VON POLL IMMOBILIEN in Mainz/Wiesbaden/Ingelheim. Her three-month internship encouraged Elena Wörle to pursue her career path in the real estate industry.

Since August 2022, she has been part of our team as a trainee real estate agent. Her goal is to support the team in the best possible way, to learn as much as possible and to successfully complete her training after 2.5 years in order to start her career as a real estate agent at VON POLL IMMOBILIEN.