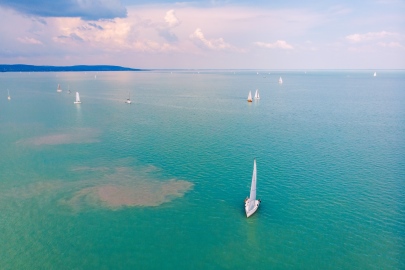 While the southern shore of Lake Balaton is a major attraction for tourists, the northern shore is also a major attraction for visitors looking for natural treasures. It is no coincidence that the Keszthely Bay area is becoming increasingly popular in the western basin of the Hungarian sea, where more and more sophisticated properties are appearing on the housing market.

Keszthely is the capital of the western basin of Lake Balaton and is a popular destination for both domestic and foreign tourists, who can enjoy the world-famous services of the nearby Lake Hévíz while discovering the town's attractions and swimming in Lake Balaton. Moreover, the pandemic has made the value of places close to nature more attractive, with people increasingly staying in quiet, rural surroundings, hiking tours, monuments in beautiful natural settings and quiet resorts with sophisticated services.

Keszthely is also increasingly being discovered by visitors, with its magnificent panoramic views of Keszthely Bay, its monuments and charming public spaces, not to mention the splendid Festetics Castle, where Netflix recently filmed a cult series called Shadow and Bone. But it's not just the western capital of Lake Balaton that has become a popular destination, neighbouring villages such as Vonyarcvashegy, Balatonederics and Gyenesdiás are also becoming increasingly popular, with the Festetics Lookout offering a magnificent panorama of Keszthely Bay and the surrounding mountains.

The House of Nature visitor centre opened in Gyenesdiás a few years ago, showcasing the natural values of the surrounding landscape, and the village boasts one of the oldest 17th century wine cellars in Europe. The resort village is not only famous for its beaches and tranquil surroundings, but it is also an excellent starting point for exploring the area, with the natural beauty of the mountains combined with ancient castle ruins and romantic small villages, but also the world of the witness hills (Badacsony, Szent György Hill) and Szigliget, which are within easy reach.

'Gyenesdiás is ideally located right next to Keszthely, in fact the two settlements have grown together, so those who like the hustle and bustle will find their number, and those who want complete tranquillity will find theirs too. We are talking about a pleasant, peaceful settlement where it really feels like being alive. The infrastructure is excellent, with a wide range of shops and excellent beaches. It is also easy to get here from Budapest via the motorway, and the M76 motorway to Zalaegerszeg is under construction, which will also bring Keszthely closer. And for foreigners, the Hévíz-Balaton Airport offers quick access,' says Andrea Szabó, a domestic consultant for Von Poll Real Estate, one of Europe's largest real estate brokerage networks.

The rapid pace of development has also boosted the area's property market, with not only a significant turnover of holiday resorts but also the construction of sophisticated family houses and villas that can serve a multifunctional role, meaning they can be used for seasonal or permanent housing. New build properties can meet a wide range of needs, with modern energy-efficient heating and cooling systems, modern landscaping, large terraces and, in many cases, swimming pools. They can also meet luxury demands that combine 21st century requirements with the latest trends in housing culture.

'Gyenesdiás is close to the western border, so more and more foreigners are interested in the real estate market, Germans, Austrians, many of them retired people settle on the shores of Lake Balaton, because they can create a good quality of life for themselves in pleasant climatic conditions. In fact, small 'German-speaking' communities have already been formed and are actively contributing to the development of the settlements. At the same time, the Balaton region, which is becoming more valuable due to the epidemic, is also attracting many people from Budapest, either on a temporary or permanent basis. In other words, there are many target groups shaping the local housing market, which is why there is a significant group of buyers interested in high-quality properties in the green belt', summarises the experience of Von Poll Real Estate Hungary.