On the trail of a wild castle in the Buda Hills 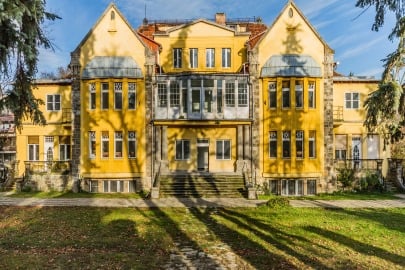 Budapest is full of architectural gems, one of which is the art nouveau Sándor villa in Lipótmező, which has been recently renovated, and its new owner will be enriched with a stately bourgeois residence. The 26-room mansion in Lipótmező, situated on a 4600 square metre park-like plot, is perfectly suited as a luxurious home, a health or educational facility, a corporate holiday resort or even a business office building.

Hungary has unfortunately, for historical reasons, paid less attention to the protection of the historical monuments of grand bourgeois villas and residences, although Budapest's golden age, the period of the previous turn of the century, was manifested in huge urban developments. New districts were created, and in addition to the tenement houses and palaces of Pest, which formed the patina of the city centre, magnificent apartment buildings and holiday resorts were built in the suburbs and green belts of Buda to meet the needs of the growing middle and upper middle classes.

Now the renaissance of villas has come again, and not only are brand new, minimalist family houses being built, but buildings that heralded the glorious era of the past are also being renewed and are emerging from the mists of the past to shine once again in their former glory. One such building is the former Sándor Villa in Lipótmező, in Völgy Street, which is located in the quiet, intimate surroundings of the Buda Hills, with forests almost at arm's length and a huge park of over 4,000 square metres, creating a wonderful natural atmosphere.

The 780-square-metre mansion has been recently renovated, with modern technical systems and machinery added, which is particularly important for old buildings. The former Alexander Mansion has a stunning architectural heritage, with its elegant oak staircase, wood panelling and engraved glass doors.

The history of the historicist Art Nouveau mansion is chronicled by families who played a significant public and economic role. If these walls could tell a story, we are used to hearing it, and in our case, we could hear some truly extraordinary stories. The villa, also known as the Széchenyi hunting lodge, was built in the late 19th century to the designs of Dezső Freund, bought by Pál Sándor and Mátyás Polakovits in 1890, and then remodelled in 1912 by Antal Forbáth to its present Art Nouveau form.

The eponymous owner, Pál Sándor, was also the founding director of the National Hungarian Trade Association, a prominent politician of the first half of the 20th century. The villa, originally built as a holiday home, was used as a summer residence where many of the distinguished members of the political elite of the time attended receptions. According to contemporary reports, Prime Minister István Bethlen also paid his respects within its walls between the two world wars. After nationalisation, it was used as a building of the National Institute of Psychology and Neurology until the turn of the millennium, when the current owner renovated the reinforced concrete structure of the listed building. The villa has been restored to its former grandeur, and one glance at the building and the glory of the old bourgeoisie is once again visible.

The complete renovation of the mansion not only included a major restoration of the Art Nouveau façade, but also a restoration of the interior to its turn-of-the-century style, while maintaining the modern feel of the rooms. The most economical heating system, a heat pump fan-coil solution, was installed during the renovation. New bathrooms have been designed to meet the needs of the new owner, allowing for a variety of uses within the walls, including a private clinic, boutique hotel or corporate resort.

Originally built as a semi-detached house, the façade and interior design of the mansion still preserves the symmetrical split structure, with access from the common lobby through a single ornate oak staircase to the wings with terraces and balconies. There are 26 bedrooms with 17 bathrooms on three levels, while the fourth, basement level can accommodate a range of economic activities that can complement and support the main function of the building (e.g. operating theatres, medical service spaces).

In the vast park adjacent to the mansion is another 100 square metre house that can be modernised, formerly the home of the gardener. In addition, a parking lot for up to 50 vehicles can be created on the property complex's plot. The estate can be purchased with a company, while a 6,500 m2 forest is also for sale next to the villa at a guide price of HUF 400 million.