Your real estate agent for Tenerife North and surroundings

The island of Tenerife is the largest of the seven Canary Islands and impresses with an exceptionally mild climate with up to 330 days of sunshine a year. In addition to the prospering market for real estate - especially for exclusive villas, houses and apartments with sea views as well as fincas - breathtaking natural landscapes can be found preferably in the north of the island.

Culturally, the north of Tenerife can also come up with some special features. In the city of Puerto de la Cruz there are impressive museums and theaters. Tenerife's capital Santa Cruz impresses with its romantic old town as well as its magnificent buildings. For those who value peace and relaxation, Cuesta de La Villa is the perfect place. The highlight of this village is the world-famous Humboldt lookout point. This offers a beautiful view over Puerto de la Cruz, on the Orotava valley as well as on the extensive north coast of Tenerife.

Also characteristic for the volcanic island are the black sand and pebble beaches, especially the north offers a variety of them. Among the most popular are Playa Jardin in Puerto de la Cruz, Playa de la Arena in Mesa del Mar and Playa El Pris in El Pris. Thanks to the constant water temperature, you can swim in the Canary Islands all year round. Wine lovers also get their money's worth. Especially the northern region is known for its numerous vineyards. The year-round mild and balanced island climate and the fertile volcanic soils give the noble wine a special flavor.

Furthermore, the north of Tenerife shines with an excellent infrastructure. Close to the island's capital Santa Cruz is the international commercial airport Aeropuerto de Tenerife Norte.

Tenerife's versatility is also reflected in the real estate market: in Tenerife you can find attractive real estate and vacation homes for all living requirements - no matter whether in rural or urban regions. Your qualified VON POLL REAL ESTATE brokers will support you with excellent references and first-class brokerage services.

In terms of location, size, equipment and price, the most diverse wishes can be fulfilled here. While smaller villages attract with romantic fincas, there is a vibrant city life in the traditional Puerto de la Cruz. El Sauzal captivates with attractive properties in hillside location with breathtaking views of the Atlantic. Premium vacation homes are in high demand by foreign investors. In addition, there are modern supra-regional construction projects that attract many investors.

Whoever wants to buy a house in the north of Tenerife or is looking for a suitable plot of land is in good hands with VON POLL REAL ESTATE brokers in Tenerife North. Our real estate agents know both the peculiarities of the market and the properties in Tenerife and will be happy to advise you individually.

We know the value of your property

Owners who want to know the value of their property, take advantage of our offer for a free no-obligation market price assessment from our experienced real estate valuation experts. If you want to sell or rent your property, we mediate your house or apartment professionally and discreetly.

For you in the best locations - your qualified real estate agents in Tenerife will be happy to advise you personally and individually. 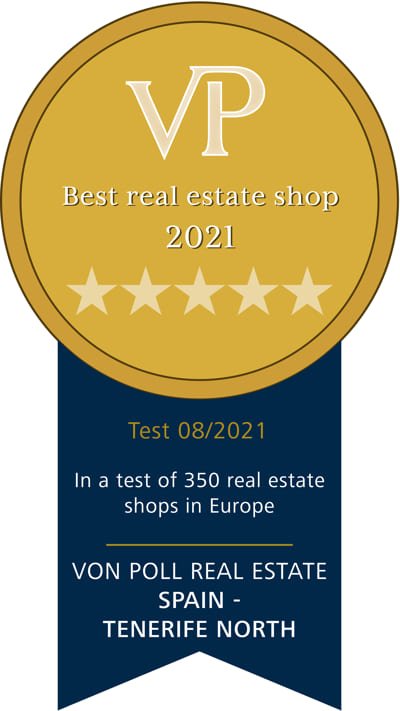